"The Avengers" are Here! 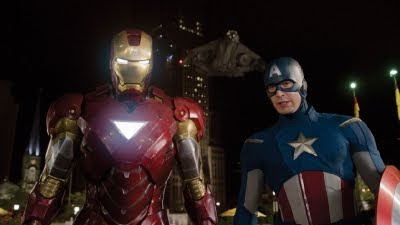 For starters “Marvels The Avengers” is a pure blast of summer fun. By carefully introducing the film’s major franchise characters through other Marvel Studios films like “Iron Man”, “The Incredible Hulk,” “Captain America: The First Avenger” and “Thor,” Marvel has put it’s money where it’s mouth is. Fan boys everywhere including me has awaited “The Avengers” like a dog waiting for a bone.

The story is thin. The action is big. The dialogue is treated with the brief sensitivity and economy of TV show. Each character manages a moment or two of obligatory self-doubt, and with little provocation turn on one another like bickering twits. Thor illustrates this when he claims, “you people are so petty,” reaffirming that you should not expect too much austerity from “The Avengers.” 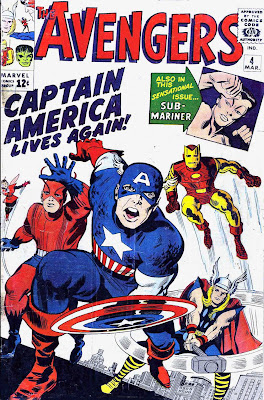 Stan Lee and Jack Kirby created “The Avengers” for Marvel Comics in 1963, as an attempt to cash in on the popularity of their super hero line-up. Within the monthly continuity of “The Avengers” there were character rosters changes, major and minor plot developments, and a plethora of action. In film, you have twenty minutes to grab the audience and get them to buy into the story. “The Avengers” as directed by Josh Whedon just makes it. When the story by Whedon and Zak Penn gets questionable, something happens to bring you back in.

SHIELD, the secret military law enforcement and espionage agency of the world, head mastered by badass spy Nick Fury (Samuel L. Jackson) is researching a power source called the Tesseract (in the comics it is known as the “Cosmic Cube” – I guess the filmmakers thought “tesseract” sounded cooler and had to Hollywoodize it). When Thor’s magic half-brother Loki (Tom Hiddelston) emerges out of the Cube’s dimension door, Loki quickly hypnotizes Hawkeye (Jeremy Renner) the archer assassin and the Shield-employed scientist professor Erik Selig (Stellan Skarsgård) into his pawns. The evil trio grab the Cosmic Cube and drive away in a jeep (because Loki needs a jeep), shooting it out with Shield Agent Maria “I’m so hot AND I can shoot” Hill (Cobie Smulders). For some reason SHIELD, who is supposed to make J. Edgar Hoover look like a piker, must have been victim of government-funded cuts, because they don’t have any security measures installed in their massive underground complex. Only a dozen agents stand between Loki and his escape. You would think a top secret military facility from comic book lore has security doors that seal the decks like in Star Trek. No security monitors notify back-up troops. Heck, they can’t even afford a security guard at the underground parking lot gate as Loki and company drive away. 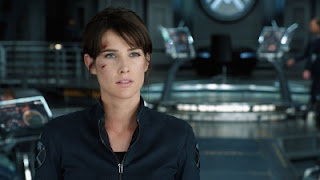 Agent Hill (remember, she is hot AND can shoot) gives chase and fires bullets through her windshield at Hawkeye 5 feet away, but no one gets hit. The only thing Nick Fury can do is activate the compounds self-destruct mechanism in hopes of burying Loki and the Cube under a thousand tons of rock, but instead destroys the SHIELD compound and cuts Agent Hills’s forehead. Realizing Loki intends to use the Cube to transport a race of flibbertigibbet aliens to invade the earth, Fury prompts “The Avengers Initiative.”

Fury’s right hand man Agent Coulson (Clark Gregg) couriers over to Tony Stark’s (Robert Downey Jr.) new green “arc reactor” powered skyscraper over New York’s Grand Central Station. This is what skyscrapers should look like. Reprising her “Iron Man” role of Tony Stark’s girlfriend/assistant Pepper Potts, Gwyneth Paltrow returns long enough to shake her booty shorts in our face and remind us that Marvel comics (and movies) are aimed at adolescent boys. Pepper convinces narcissist billionaire Stark that if he helps Shield get the Cosmic Cube back and save the world she will give him a happy ending.

Meanwhile Agent Natasha Romanoff (Scarlet Johansson) - code named the Black Window gets a phone call telling her she must stop letting a Russian mafia boss torturer her because her ex-boyfriend Hawkeye has been compromised by the enemy. Shield sends her to recruit Bruce Banner (Mark Ruffalo) - the world expert in gamma radiation (some expert – we know how that turned out, i.e. “The Hulk”) to help shield locate the Cosmic Cube along with Loki, Hawkeye and Professor Selig. 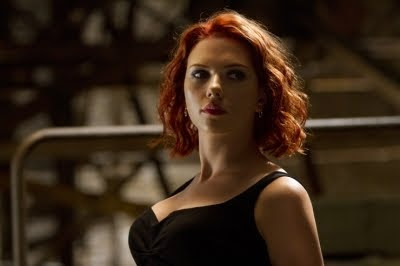 Nick Fury grabs Captain America (Chris Evans), who since being reawaked from his WW2 suspended animation deep freeze spends all his time destroying punching bags in the gym instead of acclimating into today’s society. Together with Banner’s help, Cap and the Black Widow locate the Cube in Germany, where Loki is crashing a fancy museum fundraiser. Apparently even though Loki wields magic he needs Hawkeye to help him steal a rich guys retina scan so he can break into some vault and steal something similar to Stark’s arc reactor. When powered by the Cube, the arc technology will open the alien army doorway and hordes of flibbertigibbets will crush earth under Loki’s feet. Loki gets his jollies being worshipped, and demands subservience from the rich crowd of cocktail patrons. But here in Germany, where the echoes of past dictators cannot be forgotten, an old holocaust survivor with more guts than ear hair refuses to bow to Loki. Just as Loki is ready to blast him to back to Kristallnacht, guess who shows up? That’s right, Captain America! With stars and stripes akimbo, Cap shield-slings Loki where it hurts, long enough to save the crowd, but not long enough for Hawkeye to steal the arc thingy. Iron Man drops in to kick Loki further in his nuts, and amidst the legendry meeting of these two Marvel super-hero icons, Loki surrenders. 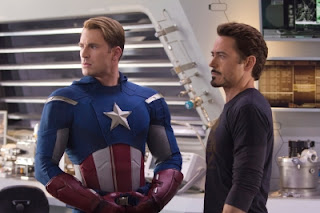 Now is it me, or should an evil magician from another dimension be able to disappear anytime he wants? Any disbelief is once again waylaid in “The Avengers” as Thor show’s up in a grand entrance to put a whipping on his brother Loki for his bad behavior. Iron Man and Thor duke it out because Thor is messing with the possibility of finding the Cube. Cap, ever the do-gooder proves his shield can take a hit from Thor’s hammer, and the three heroes call it a truce. All the while Loki is hanging out enjoying the escapade. And so is the audience.

And hence “The Avengers” escalates. Hawkeye turns good again, Loki opens the alien portal and the alien flibbertigibbets attack Manhattan. But Nick Fury has done one thing right…he has created The Avengers. The ensuing battle is both enjoyable and ridiculous. Acting as a team, Captain America falls into his natural talent of leadership, and dispenses orders. Butts are kicked. People are saved. Monsters are smashed. The Avengers win. Audiences cheer. 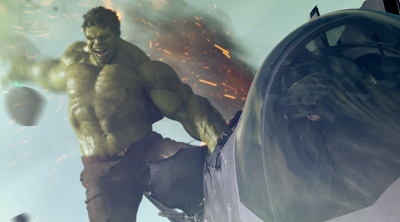 Watching The Hulk was a treat, especially in the context of how he interacts with the other Avengers. Mark Ruffalo is a warm spot in the group, a character of quiet wisdom and calm, who is in charge of his Hulk-ego more than the previous Hulk movies. A bit ape-like and rubbery in his animation and rendering, the Hulk via motion capture technology is nevertheless a visual reward that elicits laughter from his spontaneous eruptions of brutality. Captain America is played perfectly by Chris Evans, whose civilian wardrobe of high waist pants and checkered shirt matches his man out of time conflict. I craved more astonishing displays of his shield wielding skills, like the best comic book depictions. Instead, Cap’s shield throwing feels conventional and obligatory. Robert Downey Jr. amuses as Iron Man once again, delivering dialogue with vanity and humor. Jeremy Renner as Hawkeye provides a cool and focused talent, letting his arrows do the talking. A sliver of back-story tells us he once saved Black Widow from a life of crime and recruited her as a Shield agent. She perseveres with the Avengers because she has “red on her ledger,” a line that must have been included for the accountants in the audience. Johansson smolders where possible and tries to get vulnerable as needed. Chris Hemsworth as Thor is a powerhouse slugger, with more determination here than in his own titular movie.  Samuel L. Jackson as Nick Fury stands around in a giant leather coat that must be heavier than his paycheck. One can’t help but wonder what his performance would have been if Fury had more conflict and determination, with dialogue to match, aka Tommy Lee Jones in the Fugitive. 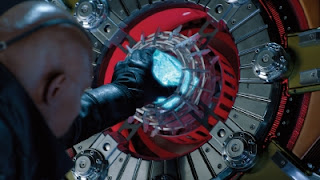 The action is scattered evenly enough to cut the mustard. But adding more intense jeopardy for each of the characters would have delivered more satisfying results. Never did I really feel like Iron Man or Thor or Captain America was in danger, nor their livelihood intertwined, as they skip along in battle to regroup now and then. When Iron Man shoots an array of repulsor blasts at the enemy, one ricochets off of Caps shield to destroy an attacking alien. It feels accidental, not planned like it should have been, in order to show the avengers are meshing as a team and can utilize each other’s strengths to augment their effectiveness.

Despite some holes in plot credibility and shallow character arcs, The Avengers will leave you satisfied. It is a good movie to enjoy and not analyze much unless, like me, you think about it on the way home. I look forward to the next one.
Posted by Tony Santo at 9:21 AM

I think you were a little rough on the movie. Sure the plot was thin and action heavy but I feel this movie took a decidedly different direction than, say, the first two Hulk movies that made a failed attempt at being profound.

Sure story matters but the nature of comic books and super-hero’s is action and excitement. Bringing any comic book to life on film seems to be a 50/50 endeavor with most attempts coming up short. You could make a list ten feet long of failed super hero movies. I think Avengers learned from those disasters and went right for the juggler giving any comic book fan what they wanted. An action packed free for all with show-downs between characters that were legendary events in the pages of Marvel comics. (i.e.; Hulk vs. Thor, Thor vs. Iron Man)

For whatever faults ‘The Avengers’ may have one has to marvel at it’s sheer ambition. A film with that many characters all competing for screen time could have been a disaster yet it moves along fluidly. No one character was left out or overshadowed by another. This was a major feat to pull off.

It may not be a perfect movie or perfect by comic book geek standards but I say cut it some slack. This was the introduction to the Avengers. Let’s see what the sequels hold. I feel one of the biggest achievements of this movie is that it appeals to people who never read comic book in their lives! I know someone who never heard of the Avengers and she has already seen it twice! That says a lot about the films broad appeal.

In case you haven’t seen it yet make sure to stick around through the credits for the two Easter eggs that follow.

Thanks for your comments Brian.
I tend to be nit-picky, but I really liked Avengers. Most of the negative comments I thought of the next day, which means the movie succeeded in making me a happy audience at the time. Part of my analytical story telling brain that is always trying to evaluate what elements of story work.
Yes, they pulled off quite an accomplishment juggling all the characters. Each makes his own entrance without stepping on the story, instead enhancing it and propelling it forward.
My overall review is thumbs up, with a very good rating.