Summer on the Planet of the Apes

As the month of July blockbuster movies approach, the new entry in the "Planet of the Apes"} franchise opens July 11 with "Dawn of the Planet of the Apes." Now is perfect timing for me to share my favorite POTA comic book art, published by Marvel Comics in the mid 1970's when Ape fever was enjoying a resurrection with comics, a prime-time TV series and a Saturday morning cartoon.

I picked up this issue of POTA magazine #12 for a whopping dollar bill, when that was a lot of money for a kid. Anything printed in black and white in those days struck me as sophisticated. One chance to flip through the pages showed me I was right.

Writers like Doug Moenich and artist like Tom Sutton were ahead of their time. With innovative ideas for environments and settings, the story titled "City of Nomads"  takes an unusual POV, a far cry from the 1968 classic motion picture (starring my then-favorite thespian, Charlton Heston).

On a huge ship akin to Noah's Ark, the city of Hydromeda is divided into two districts and beset by a class struggle. Orangutans rule, Chimpanzees work, and Gorillas revolt. Humans row the giant ship in an aimless struggle to navigate the seas. A masked assassin eliminates the ruling class, the Chimps wage war against the gorrilla uprising, and the human slaves break free to add to the chaos.

Tom Sutton's pages boast black and white pencil art, a rarity for any comic magazine. His designs, characters and embellishments are complimented by the expert moody pencil rendering, making the story a tour-de-force of skill. Just look at the giant fish served at the Ape feast. After the assassin strikes his victim and the table is overturned, the jaws of the devoured carcass are big enough for the king to hide inside. Perhaps a comment that the gluttonous ruling class are about to be devoured by their own greed?

In this dark vision of the Apes saga, the artist could easily have utilized the wardrobe and production design of any of the 5 original Ape films. Instead, Tom Sutton creates a look that any Hollywood production designer would be grateful to invent. It suggests endless interpretations of the myriad societies that may exist in an post-atom bomb century or centuries as portrayed in the POTA film franchise.  Sutton blends Northern Renaissance costume design, Robin Hood, Spartacus-style battles, pirate cutlasses and primitive constructs to make his pages a prolific entry into comic book history. The POTA films and TV series that followed merely reiterated the art and design of the original film, diluting its originality with each entry. The TV series in 1974 followed the same premise as the films, but with a fraction of the budget - astronauts fly into the future and land on an earth ruled by apes. The humans there are not as primitive as the humans in the first film. It could be argued that they are descendants of the negative zone humans from the last and worst Ape film, "Battle of the Planet of the Apes," which supposedly takes the POTA story arc full circle. Tim Burton's 2001 POTA remake explored something of a promising reinvention in costume and design, but nowhere near as unusual as Suttons pencils.

Today, audiences demand a reinvention, not just a remake. Why deal with astronauts at all when storytellers can choose to tell stories that take place anywhere at anytime on the POTA's. One can envision Apes in the jungles of Southeast Asia, Mexico, Russia, or the Congo. The visual styles can draw inspiration from Aboriginal art, Futurism, African Art, Art Deco, Islamic motifs, Japanese patterns, etc. Imagine a weekly cable TVseries with the budget of today's top-of-the-line shows like "Game of Thrones" or "Vikings," each week a different story somewhere on The Planet of the Apes. With this concept approach and various untested schools of visual vocabulary, the possibilities for production design are endless.

Enjoy the premiere of the July 11th film. I'm sure it will be an ambitious entry that will validate a retelling of the Ape saga and satisfy audiences. It will prove that we love our Apes any way we can get them...even if the approach isn't as original as the one dreamed up by Tom Sutton and Doug Moenich. The magic of the printed story is that one artist and one writer can create a universe unto itself in a matter of weeks or months. The resulting treasure is timeless. 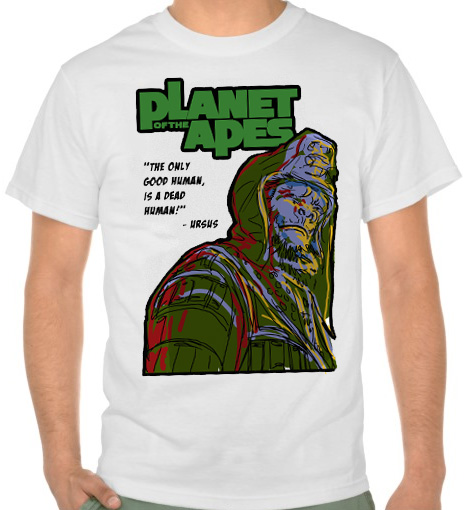 * Leave a comment on this post to enter the "Summer on the Planet of the Apes" tee shirt giveaway. Winner will be chosen at random and will be announced on July 16, 2014. Winners must have a valid mailing address and will be contacted via email for shipping.

Kids are going ape over the T-shirt!

I hope the movie is good

SanTony, you are the Apiest ape artist working today, yo. And I mean that.

SanTony, you are the Apiest ape artist working today, yo. And I mean that.