Before beginning my freelance storyboard career, I had the privilege and good fortune to be an Art Director in several full-time roles. As hard work led to opportunity knocking, I learned a thing or two about the world of Art Direction. It can walk a fine line between creativity and paper pushing, requiring an overall commitment to design and mood, yet punctuated by a “hands on ability to roll-up one’s sleeves and help with production work,” as the classifieds love to state. At one time or another, I’ve experienced all of the above.

I’ve been Art Director in publishing, advertising, and video games, and I’m certain my experiences have contributed to my effectiveness as a freelance storyboard artist, one who is able to deliver powerful dramatic images while understanding the needs of my clients - be they art director, brand manager, producer or writer.

The Influence of Visual Targets

As an artist, I automatically ask myself a question when I start a new project. What is my visual target? What kind of look, mood, graphics or design sensibility is necessary for me to sell the idea?

That same thinking applies to Art Direction. If you’re an Art Director who must sell your vision to more than one person, visual targets are a must. A visual target is typically a sample of what the finished project should look like. It can be a piece of swipe, music video, game trailer, film clip, photo or a piece of concept art. Anything that helps you specify the visual qualities of the project is acceptable. Most times the visual targets are obtained quickly by the Art Director or wrangled by someone assisting him or her.

Without these references, your team members are working twice as hard and hoping for the best result come approval time.

Maybe you’re shooting a commercial spot and your visual targets are frames from a Wes Anderson film. Or maybe a game-play clip from Prince of Persia shares the visual structure of your upcoming console adventure. Saul Bass’s movie title designs may influence your series of NYC subway ads, while the digital designs of Ray Gun will inspire your latest print campaign. Monet’s Water Lilies may have the color palette for your next photo shoot. Whatever you have in mind, you may cull from a wealth of resources.

Once visual targets assembled, the Art Director needs to obtain “buy-in” from the project manager, producer, studio execs, or powers-that-be. Whether in publishing, video games, web, or advertising, first gain the blessing of your project head. Create a power-point deck, a pdf brief, a pitch-board or a style guide with your visual reference. Walk “the client” through your ideas, mentioning what you love about the graphics, layouts, design, mood, colors, etc., and why you think these sensibilities speak to the project.

Next, share the material with the team. These are the hard working artists, designers, writers, project managers, coders, UI artists, modelers, etc. who work with you to make your vision a reality. This is your chance to rally the masses! Inspire and excite them with the visual and conceptual possibilities of the project.

Don’t expect them to remember the presentation details afterwards. Publish the visual targets and presentation somewhere – and provide everyone with access. Maybe it’s on the project server, internal web site, or anyplace they can visit to review the guidelines and see latest changes or updates to the material. Broadcast them in email threads and on bulletin boards, cubicle walls, common areas and such.

When I was an Art Director at EA Sports on sports games like “Madden NFL,” there was a time when visual targets were not so commonly accepted as a pipeline practice. Artists, engineers, producers and designers frequently had different ideas of what was an acceptable standard for finished assets.

If you asked the team what the visual goals were, you would get 10 different answers. As the studio grew in size and art leadership, the Art Directors organized protocols for visual development and discovery, pre-production and approvals. Establishing a visual target was embraced throughout the studio, with much success.

I had some key moments as Art Director at EA. One of them was spearheading early efforts to create an original IP for the latest Nintendo platforms. I looked for visual targets that would speak not only to the demographics of savvy Nintendo DS and Wii users, but also rally the interest of every in-house artist, engineer and designer who wanted to do something outside the box. I wanted the art to be unusual, memorable and unique. I had to sell the idea that our IP would be not just fun to play, but visually groundbreaking. 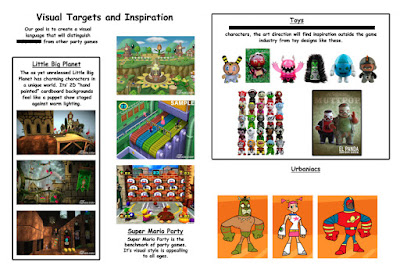 Since the project was to be designed from scratch, there were no existing models, environments, codes, or files of any kind to repurpose. There was no pipeline like there was in “Madden,” and we had to start from nothing. We didn’t have a game engine. In fact, we hadn’t even finalized the licensing agreement with Nintendo to develop on their platform! Everything was an unknown – pixels, animation, memory, legibility, and so on were all based on estimates.

I sweated nervously under a self-imposed regimen to find visual targets and develop inspirational art. My references were found in a variety of media. I culled designs from toys, animation, and illustration. It was a period of discovery for me. I partnered with a designer and a producer, with limited access to a staff concept artist and environment modeller. With their help, I began to define visual targets for characters, environments, UI and color.

No sooner had I pinned up the first prints of my results than people were stopping me in the hall, asking about the project. Their enthusiasm was contagious. Unexpectedly, I received email requests from engineers and artists asking to join the team. All this, and we still didn’t have a green light!

Result like this are encouraging for an Art Director and exciting for the team. A healthy buzz goes around the studio, alive with possibilities that lie ahead. A strong visual target and the subsequent development designs will add adrenalin into what may sometimes be viewed as standard fare. The momentum gained from such focus will boost the production cycle out of the starting gate. If done well, it will elevate an Art Director’s professional regard among execs, managers and peers, while gaining the respect and trust of the production, creative, development and support staff.

Visual targets bring groups of experts into alignment, galvanizing diverse skills toward a unified result. What better place is there for an Art Director, than to lead a team of eager creatives all sharing a common goal – to make an entertaining experience with a distinctive visual signature? Who knows, the results may echo for years to come as a resounding work of art!
Posted by Tony at 1:13 AM