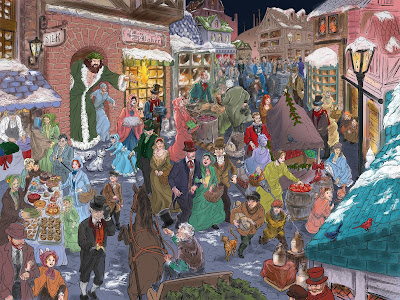 Each year I create an illustration based on Charles Dickens' "A Christmas Carol." In this sequence, the Ghost of Christmas Present shows Scrooge the joyous attitudes people embrace for the holiday.

"The sight of these poor revelers appeared to interest the Spirit very much, for he stood with Scrooge beside him, in a baker's doorway, and, taking off the covers as their bearers passed, sprinkled incense on their dinners from his torch. And it was a very uncommon kind of torch, for once or twice when there were angry words between some dinner carriers who had jostled each other, he shed a few drops of water on them from it, and their good humor was restored directly."

I struggled with finding the area of focus in the image, showcasing the crowd first and Scrooge second. Still, I enjoy drawing so much that it's hard to resist detailing every nook and cranny at the expense of a central point of conversion.

What scenes would you like to see illustrated for next year?
Posted by Tony at 1:07 PM