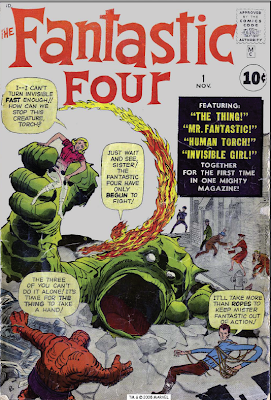 Fifty years ago this month saw the birth of the worlds greatest comic magazine. At least that ‘s what the sub title said. Writer Stan Lee and artist Jack Kirby created the Marvel Comics super hero magazine “The Fantastic Four,” and comics were never the same. A test pilot, a brilliant scientist, his girlfriend and her kid brother, all exposed to Cosmic Rays from outer space, transformed into the most fantastic quartet of super heroes ever seen. They had no secret identities; they shared living quarters in the Baxter Building, argued frequently and wore simple, monochromatic costumes.

Yet the graphics, drama and tension jumped out of every page, increasing as the years wore on. Jack Kirby drew over 100 issues in a row, and drove the book to titanic heights with his outlandish designs of fantasy and science fiction. 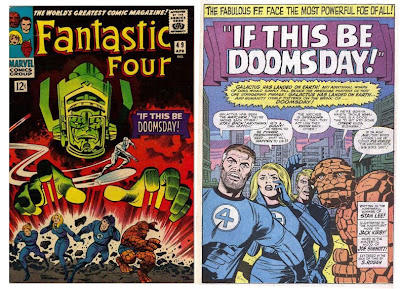 Jack, also know to comic fans as Jack “KING” Kirby, because of his contribution to a significant portion of the Marvel Universe (Kirby was co-creator of Captain America, and created the Hulk, X-Men, Thor, Silver Surfer, Galactus and the Black Panther, among other heroes) set the benchmark for all comic artist to follow. 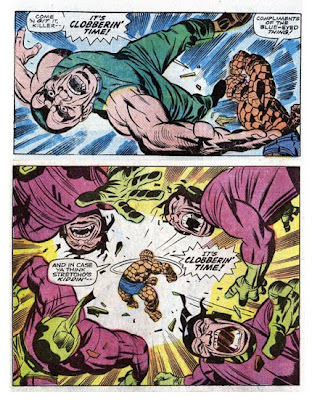 Kirby’s art was a driving inspiration to me when I was kid and teenager studying comic book art. Kirby’s characters leaped off the page. When they punched each other, the reader felt the impact. Particles seemed to fly from each pummeling blow. In addition, Kirby had a peculiar way of drawing anatomy that was in a class of its own. The form was there, but Jack made up muscles that didn’t exist - and got away with it! Somehow his anatomy looked great, even though it was embellished with tendons and muscles not found in science. 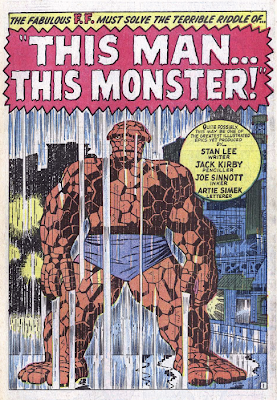 Kirby made you believe in his characters. They felt real, even though they looked like they were chiseled out of stone, with square jaws, wide set eyes and chunky forms. While making “Bambi,” Walt Disney once said that for the movie to succeed, the audience must quickly decide to care about Bambi. Kirby illustrated that tradition in every way. The monstrous Ben Grimm as the Thing became the most popular character of the group, not because of his grotesque appearance and herculean strength, but because of his endurable spirit and pathos as drawn by Kirby. 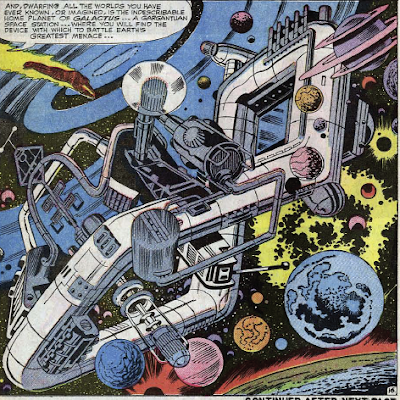 Then there was the Kirby tech. No one could draw machines as grand as Jack. His machines, gadgets, costumes and spacecraft evolved from realistic to supernatural in the course of the 100 plus issues he drew. 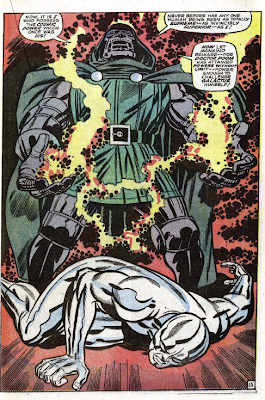 Kirby pioneered the use of the “Kirby Krackle,” which was his way of drawing cosmic energy effects using multiple black circles joined together and juxtaposed against wavy shapes and perspective lines. Anytime a new villain came from space or fired an energy blast, it was accompanied by the “Kirby Krackle,” which the reader could almost hear behind word balloons and captions. The “Krackle” became his signature look for years to come.

Jack was a master storyteller. Subsequent Marvel artists were trained to study his storytelling approach, as Marvel adopted a “Kirby Look” that became their house style. Marvel comics, or “the house that Jack built” became legendary, and Kirby’s work permeated into pop culture status. 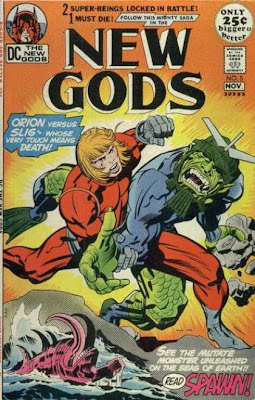 In the early 70’s, Kirby moved to rival DC comics, and created the legendary New Gods, with favorites like Darkseid, Orion, Mr. Miracle and Big Barda.

Kirby’s work lives today - not only in comic inspirations but also in the animated world. Warner Brothers cartoons have included many of Kirby’s New Gods character in “Superman: The Animated Series,” and later in “Justice League.” Cartoon Networks “Batman: The Brave and the Bold” regularly take visual action cues from Kirby, as well as introducing young audiences to lesser-known characters like Kamandi and The Demon. Another Cartoon Network series, “Ben 10,” created by Man of Action, is heavily influenced by Kirby’s alien creations, with their flashy stripes, zigzags, broad shapes and bold contrast. 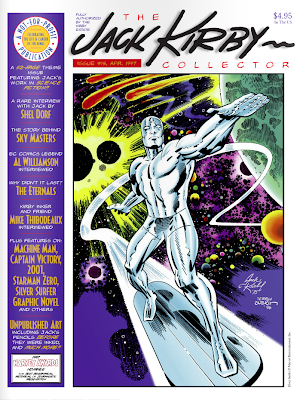 Kirby’s work is so sublime and influential, and his fans are so legion, that TwoMorrows Publishing even named a magazine after him – “The Jack Kirby Collector.” Every page is loaded with Kirby sketches, pin-ups, original pencils, and unpublished art. The interviews with Jacks peers, colleagues and fans are insightful, compelling and a testament to his craft. To further punctuate Jack’s titanic contribution, each issue is printed close to tabloid size. 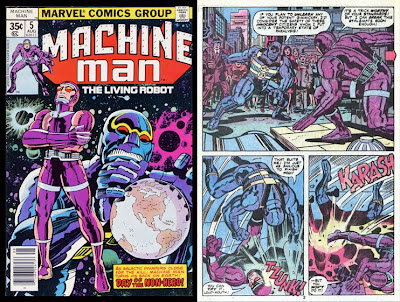 I will always treasure Jack Kirby’s contribution to comics and my career. Without him I wouldn’t have spent summers locked in my room penciling super heroes and deciding in 6th grade that I was going to be an artist when I grew up. Thanks Jack, for everything. As I stare at your collected works like FF, Captain America, and Machine Man, I am still wondering how you did it.
Posted by Tony Santo at 10:37 PM

Excellent column and tribute, Santo! Ol' Jack did indeed set the bar. I always appreciated the emotion he could get from his illustrations.

Though this column could use a good clip of how Stan "The Man" Lee remembers the creation of all of those famous characters...