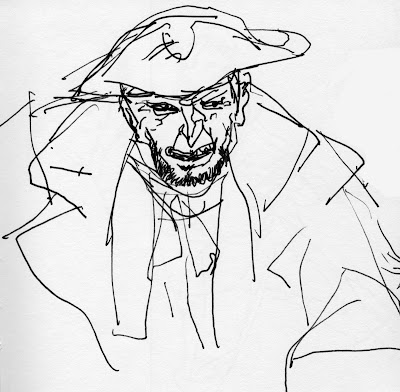 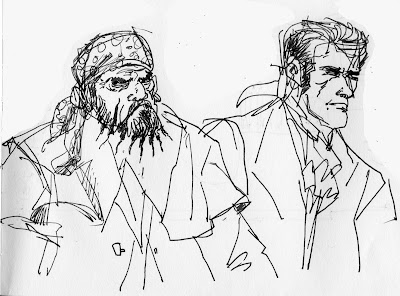 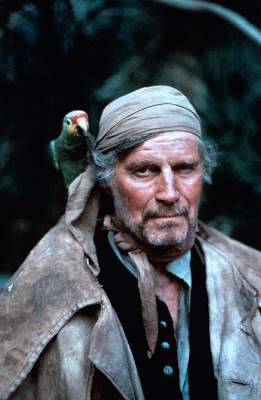 I recently watched "Treasure Island" with Charlton Heston and a young Christian Bale. If you haven't seen this yet, it is probably because it was broadcast on HBO about twenty something years ago, and only now is released on DVD (http://www.imdb.com/title/tt0100813/). Artists will instantly notice the color palette is heavily influenced by NC Wyeth's "Treasure Island" illustrations. Striking is the resemblance between his Old Pew painting and the portrayal by Christopher Lee. With a cast including Olvier Reed as Billy Bones, Julian Glover as Dr. Livesey, and Heston himself, this one is my favorite interpretation of the Robert Louis Stevenson classic. Heston is not to be missed here. His son Fraser Heston directed, and did a bang-up job. Music by the Chieftans.
I did a few fountain pen drawings of my own pirates while watching the film. Always a pleasure. 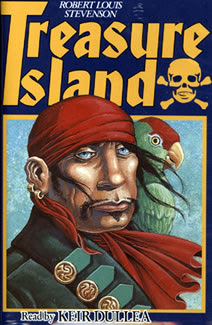 My all time favorite audio book reading is by Kier Dullea (2001: A Space Odyssey). You can get it off iTunes to replace your old cassette copy like I did. Unfortunately it is an abridged version. No one captivates me with voices as much as Dullea reading this tale. Every time I listen to this audio book I am inspired to start drawing. I have a fat folder somewhere in my closet loaded with studies I did years ago when I first played it. One of these days I will post them.
Posted by Tony Santo at 12:13 AM