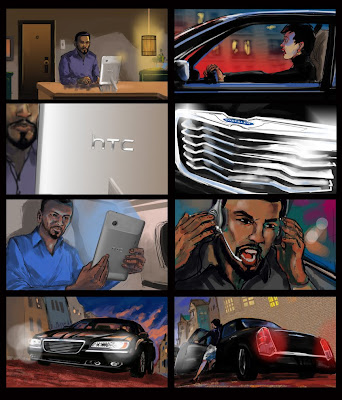 You see it all the time in film and television, even in video games. It's called product placement. One of the most blatant examples in film that I can recall was in Moonraker, when the cable car crashes through the station wall, revealing a giant 7UP billboard overhead. More subtle approaches are when a film shoots a car chase sequence and every car is a Plymouth or Chevy. Ever notice how one year Bond is driving an Aston Martin, then in his next film it's a Toyota, and another a Mustang? You can see it in Madden NFL and other games - cross promotions with Snickers, Pontiac and Reebok. Manufacturers will pay to have their brands advertised in your product, one way or another.
For this small film pitch, the client showed Chrysler, HTC, American Airlines, and other brands how they would be "promoted" as part of the story.
Posted by Tony Santo at 12:05 PM