50 Years of Bond and More 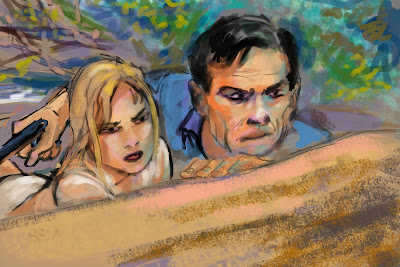 In October of 1962, the first James Bond Film Dr. No, was released in the UK. That was almost 50 years ago. My tribute to the first Bond film was done very quickly, probably in half an hour. I tried to make it feel like Sean Connery, capturing his likeness from memory. For Honey Rider as played by Ursula Andress, I was happy to make her an exotic looking blond. In this way I am attempting to give the illustration a life of it's own, not too dependent on the literal representations of the actors in the film. 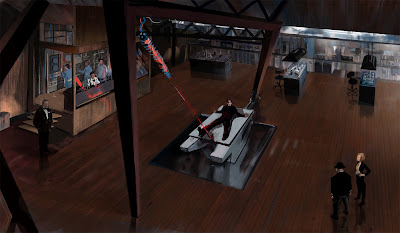 And here I am still staring at this painting from Goldfinger that I started 2 years ago. It just sits there until I feel like working on it. Here it is, close to finished. Probably the most memorable sequence from any Bond film, in my humble opinion. Goldfinger is considered by many, including me, to be the benchmark of the series. 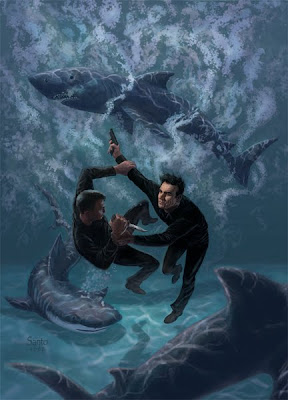 The first full-fledged digital painting I ever attempted was this sequence from Thunderball. I took my time and created this in my Florida studio at night while working as Art Director at EA Sports. I was pretty happy with it then, but not so much now. It is overworked and a bit stiff, the design mediocre. My inspiration were the Bond posters of Frank McCarthy and Robert McGuiness. Both artists were able to take a commercially recognizable head shot of Bond and use it in any setting. Regardless of how many explosions, scantily clad women, and action were around Bond, there was Connery, handsome, detached, and indestructible. 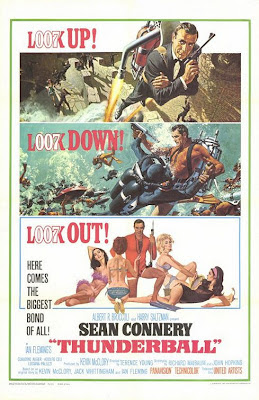 Great posters like the ones they painted in the 1960's were larger than life. This was back when posters made you WANT to see a movie. As a kid a thrill would run through me whenever I saw a Bond poster. After Bob Peak's design for The Spy Who Loved Me, a few painted entries like Moonraker, Octopussy, and the classic "through the legs shot" of For Your Eyes Only, the subsequent posters employed photos and head shots to sell Bond, and failed to intrigue me. 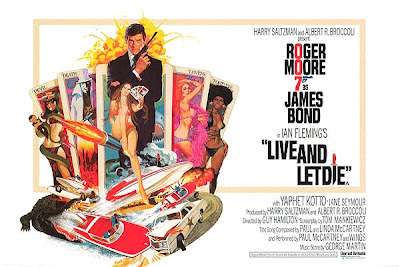 I got the idea to illustrate the Bond films after playing the EA video game "Everything or Nothing." I thought it would be cool to design my own Bond game, create concept art for it, screen mock-ups, and animatic reels to "sell" the idea to EA. 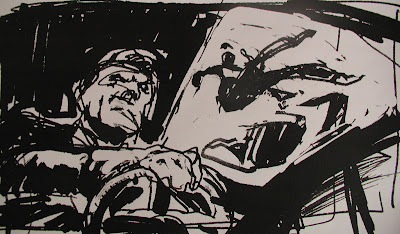 My take, probably too expensive to fund, was to give the player the choice of playing as one of the (then) 5 actors from the Bond series. After choosing your Bond, you would activate him in the next mission level. Instead of Sean Connery in Goldfinger, you could play as Roger Moore/Bond in Goldfinger. Or instead of George Lazenby in On Her Majesty's Secret Service, you could be Sean Connery falling in love with Diana Rigg, and so forth. 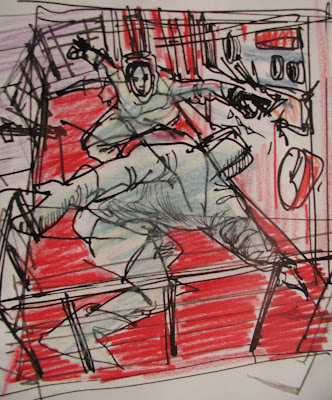 The licensing fees alone would probably kill the idea during the pitch, but a man can dream. It would have been the most played game in my collection.
Posted by Tony at 9:54 AM