Let me state up-front that I remember my first comic convention. It was around 1979 or so, when it was called "Creation Comic Book Convention," or something like that, at the Pennsylvania Hotel. The only celebrity there was beautiful Caroline Monroe from "The Golden Voyage of Sinbad" and "The Spy Who Loved Me." But I was there for the comics. I sat with rapped attention as John Byrne spoke about his current run on the X-Men, right before his stellar fame took off. He was approachable and accessible to anyone who was in the room. It was the first time the comic book business became real for me. I begged my folks to let me spend the $100 on a "Master Class" that was taught by Gil Kane, Burne Hogarth, Harvey Kurtzman. At one of those early conventions I bought my first Neal Adams comic, an old X-Men issue in the Savage Land. Strangely, I could not find his credits in the book, but suspected this was the guy I heard so much about. Costumed attendees were few and far between. The dress-up was reserved for the Saturday Night Costume Contest. I attended annually for years after, rubbing elbows with the hot and sweaty geeks who perpetuated the aisles lined with dusty back issues in cardboard boxes. It was typical that halfway through the day I would be starved, tired and fighting a headache. Usually I trekked home on the Staten Island Ferry feeling like I overstayed my visit.


It's all changed now. The NY Comic Con 2013 at the Javitts Center has borrowed the format from the famous San Diego Con. Like San Diego, celebs, movie studios, TV shows, video games, toys, comics, collectibles, tee shirts and even art supplies enjoy the limelight. The costumed attendees comprise more than half the crowd and may be worth admission alone. I was not ashamed to chase down an Adam West Batman lookalike and take a photo with him. The range of quality and creativity in the costume designs and executions ran the gamut from simple to sophisticated. Back in my day, the costumed ones were often looked upon as freaks. Today, they are looked upon as a community of neo-geeks, and proudly so. Spend a few hours at the Con and you will love being among them, as their enthusiasm is a bit contagious. "Artists Alley" is where you can leave the vendors to meet comic book and fantasy aritists, peruse their work, chat and maybe purchase an original or two. Most are delighted to meet fans and collectors. For me, I like running into old colleagues at these tables.
As celebrities go, I was disappointed with how hard it was to glimpse any of them. As far as I could tell from my "info booth" inquiry, the cast of The Walking Dead, Gillian Anderson, David Duchovny, William Shatner ("Spock!") and the rest of them were only accessible if you purchased an autograph ticket. The A-listers were charging about 60 - 70 bucks to stand on line in Disney-style queues, something that I had not the time or money for, as I was busy with my demos. In any case, I could not so much pass by the table and see my favorite thespians from a short distance. Although I didn't pay for my pass, (it was courtesy of the good folks at Canson and Jerry's Artist Outlet), I know it was pricey, and I feel sorry for the poor soul who has to spend more than 20 bucks for an autograph.

I used Talens gouache to promote this excellent line of water soluble paint. I got lots of questions about the material as well as lots of interest in my work. Several attendees said I was "Bad-Ass" and "Awesome" and a few inquired about buying the Zombie piece I was painting. The gouche made it easy for me to cover large areas with opacity, and still rework the area with water if I needed to.

On day two, I drew portraits of customers in their newly purchases sketchbooks, and even did one on a trading card. I had the pleasure of meeting some friendly and appreciative fans. Kyle from Canson along with the gang at Jerry's Artist Outlet couldn't have been more supportive of my efforts. I finished the demo with "reportage" drawings of the kind that got me started in my career. I enjoy the freehand approach, working directly with a dipping nib and ink.

Comic Con was fun and exciting. I enjoyed working my tail off, being flexible to the needs of the booth and the crowd. I had a blast and would like to attend again next year. And I have plenty of enthusiasm to experiment more with some great art supplies. Now let's see…I have a year to figure out what to work on.

Check out my gallery of images below. Click to enlarge. 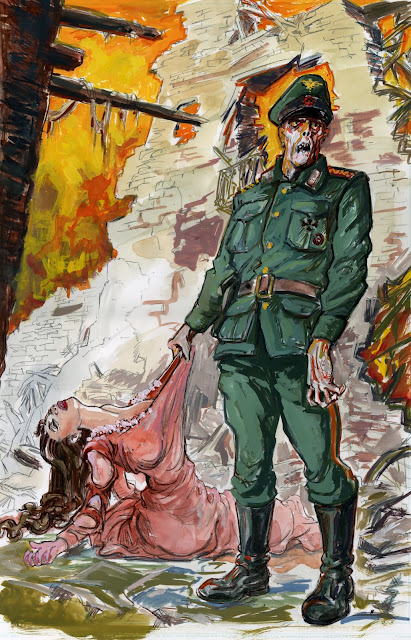 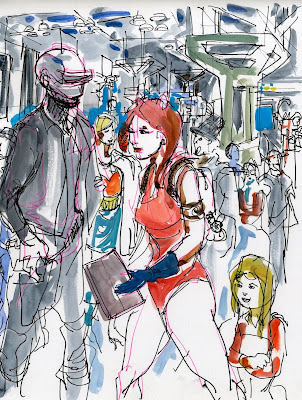 Tony, your costume is the best. Loved following your time at Comic Con. Your talent continues to amaze me! Yours truly, Maria xoxo