"The Legend of Tarzan" Arrives in Full Swing

"The Legend of Tarzan" hits a new cinematic benchmark for Tarzan. It's reverent in the right places, with probably  the best live-action depiction of Tarzan - one that is closer in tone to ERB's literary work than any other interpretation.

The dialogue in the script plays a bit simple, but what the script lacks in sophistication it makes up for in performances and film making.  The camera takes it's time with a slow reveal of Africa, showing us lush landscapes, sultry jungles, swooping tracking shots, and 3D character animation.

Alexander Skarsgard is a fine Tarzan, portrayed a bit more modest than his literary version. Burrough's Tarzan was commanding among man or beast. His superior intellect and jungle-conditioned strength and agility surfaced at every opportunity.  In the film, Tarzan seems less dominant among the apes, as evidenced when a rival gorilla kicks the tarmangani out of him during the film's big boss-battle.  Plausibility seems to be the big intent.

However, the filmmakers paid a compliment to Burroughs, writing Skarsgard's Tarzan as a man of few words, the way Burroughs intended.  You can sense the backstory in Tarzan's brooding silences, his pensive soul, and his maturing acceptance of civilization's capacity for greed and violence. He appears to commune with animals without speaking. Unfortunately, the filmmakers missed a rich opportunity to demonstrate Tarzan speaking to the apes in their native tongue, a scene that always astounded me as a reader. I was left with the impression that Tarzan is more the "Friend of the Jungle," instead of  "Lord of the Jungle."  Nevertheless, the film strength is in it's protagonist. Tarzan leaps, jumps, climbs, swings, swims  and fights with the grace of a gazelle and the strength of a bull ape. 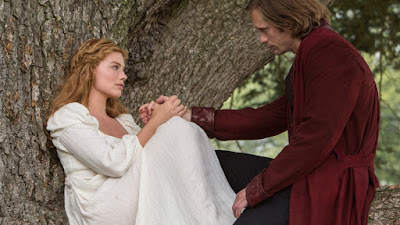 Burroughs had a gift for introducing new characters in his novels and making us care for them in a page or two. In "The Legend of Tarzan," the secondary characters are not as memorable.

(Margot Robbie) forces an overly-simplified American accent as Jane, probably because there is nothing remarkable about her dialogue. I couldn't help feeling that a production of this caliber could have been enhanced if it reflected the pronunciations and vocabulary most of us associate with American aristocrats of the late 1800's.  Instead of sounding something like "Tarzan my dear, I insist you let me accompany you to Africa. I've endured jungle hardships before and there shall be no exception for me this time,"  we get the lowest common denominator of television series dialogue, written to advance the story quickly instead of expounding on it. Jane's lines are short and sweet when she says "Africa is where I grew up. I'm going with you."  Jane has appeal, but deserves more. 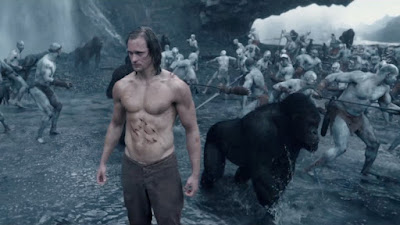 Samuel L. Jackson is out-of-breath as an American emissary and former Civil War freedom fighter who wants Tarzan to help expose Belgian King Leopold's tyrannical intent to colonize the Congo. It's easy to relish his performance as he provides comic relief and lucidity to the precarious expedition, all the while maintaining that Tarzan is the best hope at squashing the looming invasion. The jibes between he and Tarzan are a hoot.

Christoph Waltz plays the villainous Lt. Rom with his usual disquieting menace, one we have come to expect in the wake of his roles in "Inglorious Basterds." Like Jane, he doesn't have enough script to play with, and we're waiting for tension to build as if Tarantino wrote his lines. He is perpetually creepy as villain, but when he whips his rare African silk rosary beads into a lariat to ensnare muscle bound warriors, dinner guests and an unassuming Tarzan, it felt like a gimmick unworthy of a Tarzan story.

I detected no racist overtones in "The Legend of Tarzan," despite the knee-jerk reaction of some critics to accuse it of such. This is an adventure where Tarzan fights to save Jane, the Congo tribe, and the future autonomy of his African homeland from the crushing enslavement of European colonization. Tarzan plays the savior role in all his literary adventures, appearing like a flash of lighting to save an innocent prey from a hungry lion or other attack.  The "bronze god" has easily maintained worldwide hero status, not because he is a superior specimen of a white man, but because despite his near naked appearance and predilections for jungle habits, Tarzan combines his animal conditioning, super strength and superior intellect to preserve the innocence of his adoptive homeland from those who wish to exploit it.

Like Burroughs Tarzan novels, the weakest of his stories are still great reads. Similarly, the imperfect script of "The Legend of Tarzan" still allows solid entertainment, with the focus on portraying a fascinating and substantial Tarzan.  If audiences give Tarzan a chance and see this film, there is a strong likelihood he will be around at least another hundred years.
Posted by Tony at 10:17 AM