Artists of the Apes - The Best Bananas of the Bunch

This month's release of War for the Planet of the Apes is bringing in "box office bananas" and providing what many audiences think is the best of the newer Ape's trilogy.  It's a perfect time for me to pay homage to one of my favorite life-long franchises by sharing some of the great comic book illustrators who breathed exuberant life into the Marvel premium format comics magazines that broke ground in 1974.

Following the success of the original 5 POTA films and the advent of the POTA TV Series, Marvel published a great BW magazine (bigger dimensions than your average comic book) which could be scooped up for a handsome dollar at your local newsstand (if they hadn't sold out yet!).

In a former post where I mentioned POTA and gave away two self-designed POTA tee shirts to lucky readers, I highlighted the brilliant pencil art of Tom Sutton and the writing of Doug Moench in the most amazing and visually inventive Ape Art a kid could witness. In this post, I am sharing the contributions of two additional art greats - Mike Ploog and Rico Rival along with the striking cover by artist Bob Larkin.


In 1974, I was mere young pup, and somehow managed to finance a few issues of this rare mag. To say that I was incredibly pleased is an understatement. The cover of issue # 13 by illustrator Bob Larkin had me transfixed for years. Since then I've researched a lot of Larkin's work, and this cover may be one of his best published pieces. The reflected light and additions of red contours on the primary Ape's left side are outstanding and contribute to raising this art above the norm. The background showing the ape and the girl tied at the stakes while more apes dance a "dum-dum" around their fire are direct as they can be. This is going to be one Ape tale that General Urko himself would cherish.

Inside, the two aforementioned artists split the mag. The first story illustrated by Mike Ploog is part of the "Terror on the Planet of the Apes" story arc. Jason, a blonde surfer look-a-like who dresses like Tarzan seeks revenge on the Gorilla soldier who killed his parents. Lost in the wilds of some arboreal jungle, his friends get kidnapped by primitive apes and Jason rescues them with the help of Lightsmith, an old hippie dude who travels in his "Wonder Wagon." 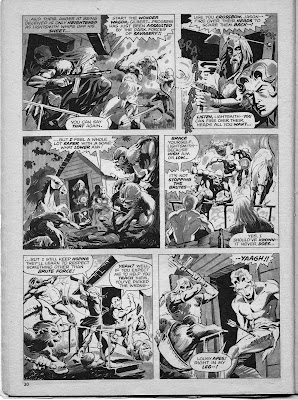 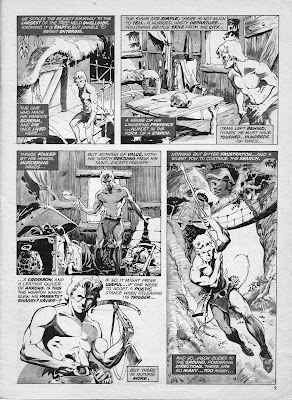 Ploog's use of high contrast black inking is complemented by his deft placement of grey tones throughout. Like an old black and white movie, the lack of color can work wonders in the right hands, and Ploog captures a mood of despair and mystery with his handiwork. Ploog had a distinguished career in movies as a story and concept guy for many years following. Doug Moench's writing is more memorable here than in many of his Marvel and DC super-hero titles.

The second story is the comics adaptation of Escape from the planet of the Apes. As most of you ape-o-philes know the motion picture had a total of three apes appear on screen (I'm not including baby Ceasar or the guy in the gorilla costume who kills Professor Milo in the films opening.) This film turned out to be quite well put together and captivating even though it's a long way off from the future Ape timeline. Philippine artist Rico Rival hits it out of the park with his art. 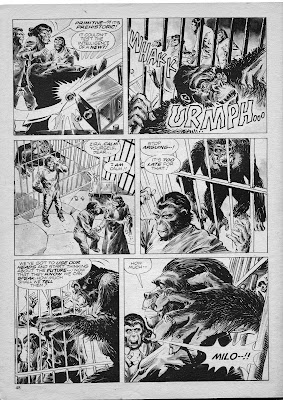 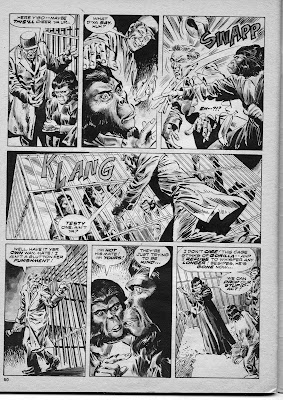 If Rico was missing all the fantasy subjects he and other Philippine artists were doing at DC back in the seventies, it's not evident. The splash page alone makes me wonder just how the heck this guy was so good? He clearly relishes the drawing of drapery, people, poses, action, pantomime, mood and emotion, embellished with his bold line work and immersive staging. 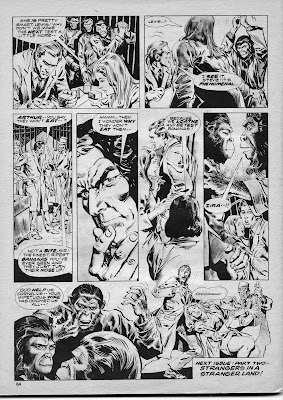 Many of today's comic artists would probably copy movie snapshots for an illustrated movie adaptation. Rico Rival instead draws the daylights out of the story and makes this interpretation feel like a brand new totally original ape animal .

If you have a day to kill, kill it with these two genius artists. You will be mesmerized and astounded over how beautiful comic books can be in the right hands.
Posted by Tony at 8:38 AM